This is great for running in Office365 as the EAC is a real pain for doing anything semi-autonomous, especially if a large amount of users are involved.

So this is one side of the puzzle solved for Exchange and Lync integration for voice mail integration.

We still need to enable all or at least a proportion of users for a hosted voice mail policy when the users' mailbox is in Exchange Online and Lync is on-premises or hosted.

I am assuming you have your hosted voice mail policy and hosting provider configuration created and this is working to exap.um.outlook.com just fine and dandy.

What the script does is three fold:
1. It will apply the hosted voice mail policy to your selected users
2. It will set their 'hostedvoicemail' attribute to $true
3. It will set their UPN as their email address if it isn't already as Lync uses this to find the EWS endpoint for the users mailbox

#Oliver Moazzezi Exchange2010.com
#Enter OU DN for $OU
#An example of an OU DN is: "OU=oliver,OU=moazzezi,OU=exchange,DC=2010,DC=com" - keep it in quotes
#You can see a list of all Hosted Voice Mail policies by running Get-CsHostedVoiceMailPolicy
#Ensure you keep the "Tag:"

I can write up the process of creating the hosted voice mail policy, the hosting provider and clarification on what is needed on the Edge Servers SAN certiifcate if people believe there is value in this. Let me know in the comments.

Posted by Oliver Moazzezi at 5:18 pm No comments:

My unfortunate experience with Nokia Support

It's with a heavy heart I am writing this. But part of my job as an MVP is to provide feedback to Microsoft, this is usually related to Exchange Server, Lync Server and Office365 but today my feedback is being written about my customer support experiences returning my Nokia Lumia 1020 in for a warranty repair.

After the last 3+ weeks I have had with Nokia support in Europe, which Microsoft is taking over, I feel I have to provide this feedback on my blog after being blocked at every avenue by Nokia Support to give this any other way.

The story begins with my trusty Nokia Lumia 1020 device getting an issue with its 41mp rear facing camera. The inbuilt Windows Phone 8.1 camera app would fail to open as well as the other rather good Nokia provided ones. Restarting the phone or resetting the phone didn't fix it either. So I presumed there was a hardware fault.

A quick search on the internet showed I could put a service request in via http://www.nokiatechsupport.co.uk/NokiaIMEIPage and that by putting the IMEI number in my phone would show up as to whether it was under the standard Nokia 24 month warranty or not. Fantastic!

Going through the process was pretty painless. I put in my IMEI number, and my phone is confirmed as in warranty. I put in the details page that my camera has stopped working, and then it's confirmed that UPS would pickup my phone the next day.

Fantastic – or so I thought..

This was the email I got from Nokia after submitting the service request: 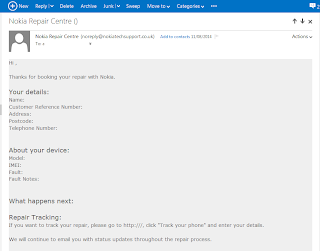 This actually made me mildly panic as I thought somehow my service request hadn't made it and I would have to do it again. However sure enough a UPS guy came for my phone the next day.

I packed the phone in an HP shipping box not very much unlike this one. But my one was much larger: 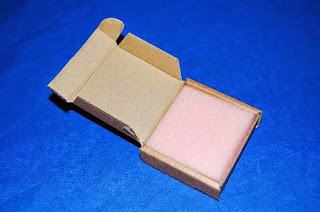 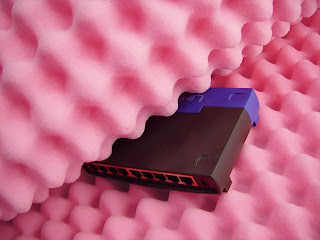 1" inch thick anti static padding foam - and off it went on its merry way with the UPS guy.

I then hear nothing from Nokia for  6 days. I get this message: 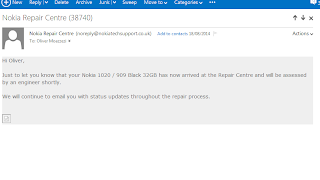 So great they received my phone, I must admit I was starting to panic. I sit back and wait for my phone to be sent back to me with a fixed camera – fantastic!

The very next day I get this: 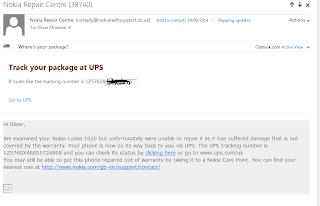 Not great – I guess they couldn't fix my phone. I was perplexed why they hadn't contacted me to see if they would repair it for a fee. But I had already looked on eBay and found a replacement 41mp sensor and a video on YouTube of how to replace it. So I was OK.

When I received it back however I was shocked: 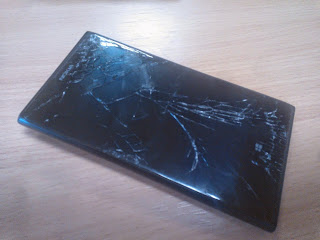 I was pretty livid. I immediately started looking on http://www.nokiatechsupport.co.uk/NokiaIMEIPage and eventually found a contact number.

I got through to a support guy and informed him what had happened. Let me tell you – whoever this guy was – he was great. He was ever so sorry, took my case reference, apologised, put me on hold whilst he found out what to do, at this point he had spoken to the repair centre who informed him of some package damage (now this could have been translation issues as English wasn't his first language, or I misheard) and then eventually said a manager would call me back. I was pretty calm at this point as I felt everything was going to be OK. Hey accidents happen right?

I get a phone call from a lady called 'Belle' who in not so many words tells me the phone was not going to be fixed as it arrived damaged. Great.

I asked "But you picked the phone from me? You chose the courier, it was sent via UPS Standard which according to the UPS website has insurance?"

"There's no insurance sir" "You're phone won't be fixed"

At this point I tried maybe 200 times to make her understand that Nokia had picked up my phone, that the damage had quite obviously happened during transit by UPS and I needed her to help to ensure UPS or indeed Nokia took responsibility for that. After all if the support website had informed me at all times my phone would not be covered, I wouldn't have sent it with the provided UPS pickup – in fact I would have sent it to the repair centre at my cost – ensuring that my cherished phone was actually covered by insurance so in the event that the herd of elephants that had so obviously stampeded over it I could claim.

"There's no insurance sir" is all she kept telling me.

Eventually I thought I had managed to get her to see the light of day and she agreed to email me, and she would ask for a copy of the emails I was sent from Nokia and also a photograph of my phone.

'Finally I am getting somewhere!' 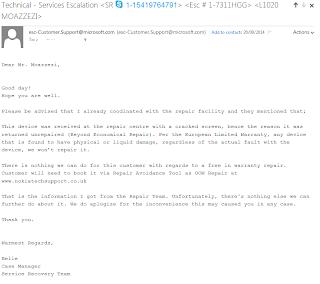 I couldn't believe I had just been treated like that.

So I went to Twitter to vent my frustration.

Now at this point NokiaCare (@NokiaHelps) replied to my tweet. They followed me and then sent me a direct message. They informed me they didn't think that sounded right about being left out in the dry and asked for my case reference and they would escalate.

So a day later I get a call back from Nokia Europe support. Fantastic I think!

Again I was wrong!.. This time the person on the phone again told me "we are not going to fix your phone, you can book it in for a repair and we'll charge you". I again tried to make them understand that Nokia used UPS to pick up my phone, my responsibility was ensuring I had packaged the phone extremely well – which I did. I was helpless beyond this point. This time the person stayed on the phone and just kept repeating in not so many words "we're not going to help you, but have a nice day sir". To the point I actually asked if he was just waiting for me to accept this and get off the phone. Which after in not so many words he admitted to. So I told him we might as well end the call.

So again I go to Twitter and tell NokiaCare about my troubles – again they'll say they'll look into it. This time I don't get another call back – just this email: 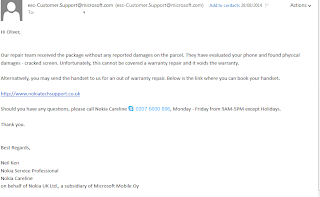 I received this email on the 28th August. I actually replied back almost immediately stating the same things I have over and over again, and even asked "If I do send my phone in and you repair the screen and charge me for it, are you still going to repair my actual issue, my camera, under warranty?".

So as an MVP I am going to point out these improvements I think need to happen.

1. There may be an issue with the automated email that is sent to a customer when a service request is put in. I received one with blank information
2. You need to state that if a customer sends in a phone and it is damaged by UPS under Nokias care – the customer is out of luck, and they will not be re-imbursed.
4. You should provide information on the customer sending the phone to the repair centre via their own postal method, ensuring the customer can then make a claim in the unfortunate circumstances like mine where their phone is damaged by UPS. If this was an option this entire incident could have been handled between myself and the method I chose to ship the phone, under the insurance I selected with the courier.

Posted by Oliver Moazzezi at 3:35 pm No comments: